Currently, there is no cure for age-related macular degeneration (AMD). The eye disease affects over 11 million people and is one of the leading causes of blindness in the United States. But research shows that there are ways to prevent and manage the symptoms of this progressive eye disease.

Before we learn how to address and manage AMD, it’s vital to know its causes. And while the disease affects those over the age of 50, there are steps anyone at any age can take to avoid any possible future vision loss. We’ll look at macular degeneration causes and what steps you can take to manage this condition.

According to WebMD, 85 to 90% of people with AMD have the early or “dry” form. When your eyecare professional conducts a dilated eye exam, they’re looking for drusen, which are accumulations of cholesterol and protein that collect under the retina. These small collections can limit typical eye operations. Researchers believe these clusters are caused by an inability of the retina to clean itself over time.

The existence of some drusen is normal and generally harmless. But as you age, drusen become harder and collects in the macula, which mediates central vision. As it accumulates, these particles keep oxygen and other vital nutrients from reaching your retina. You’ll notice a slow visual decline and, if left untreated, can progress to the more severe form of the disease, known as “wet” AMD. In this stage, small blood vessels in the eye begin to break and leak fluid beneath the retina.

According to most researchers, drusen are also a wet macular degeneration cause. It happens when new blood vessels grow underneath the macula in an attempt to bring oxygen and nutrients to starved tissue. Unfortunately, these new vessels can break and begin to leak blood and other fluid into the eye, causing damage to your vision.

What Puts You at Risk For Macular Degeneration?

Researchers have determined several conditions and behaviors that can increase your chance of developing AMD. You’ll notice that some of these behaviors are habits you can stop or change.

Age. The disease is called age-related macular degeneration for a reason. According to WebMD, 2% of people in their 50s have AMD. Almost a third of people over the age of 75 do.

Family history of AMD. Researchers have discovered several genes linked to the disease. If someone in your family has had AMD, there’s a risk you could develop it as you grow older.

Race and ethnicity. Statistics show that Caucasians have the highest risk of developing AMD, with Chinese and Hispanic/Latinos following behind. African Americans are the least likely to have the disease.

Gender. Women live longer than men, which is why scientists believe two-thirds of those with AMD are female.

Smoking. Cigarette smoking is a macular degeneration cause that is preventable. Tobacco use reduces the amount of oxygen that reaches your eyes and produces an extremely high level of oxidative stress in the body. These factors can lead to the development of the disease.

Heart disease. A history of heart disease or high cholesterol could raise your risk of developing AMD.

Weight and diet. Some studies indicate that having a body mass index of over 30 can double your chances of getting AMD. And don’t forget that a vegetable-rich diet can decrease your chances of developing the disease.

The most important thing you can do to prevent AMD is to see an optometrist regularly for an exam. Your eye care professional can offer sound strategies to help navigate your situation. And as shown above, quitting smoking, along with vigorous exercise and a balanced diet, go a long way in preventing and managing the disease’s symptoms.

Additionally, supplementation with nutrients known as carotenoids – specifically Lutein, Zeaxanthin and Meso-Zeaxanthin – can reduce the risk of developing AMD. Also, they can improve their visual performance. MacuHealth includes all three of the carotenoids that make up the macular pigment. The supplement is scientifically proven to protect the eye from damage, rebuild macular pigment and manage the symptoms of AMD. 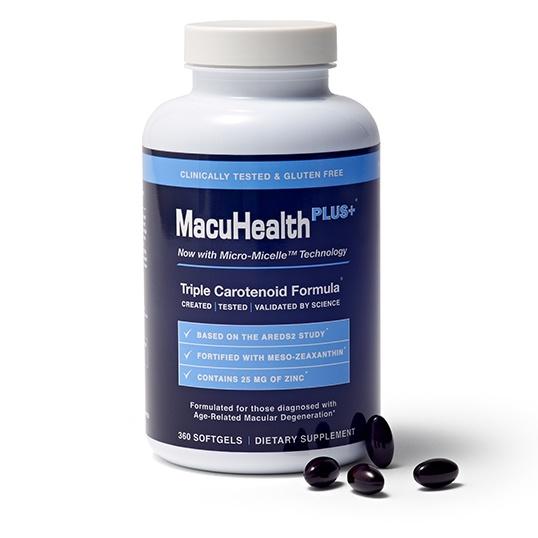